US Attorney: Collaboration Key to Fighting Violent Crime in Chicago 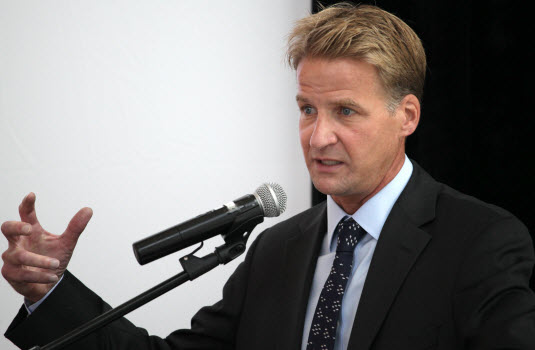 Zack Fardon, US Attorney of the Northern District of Illinois, speaking to the Chicagoland Chamber Board of Directors

You’ve seen the news. Each weekend, families in neighborhoods across Chicago fall victim to numerous shootings and murders, many of which involve teenagers and children. According to Zachary Fardon, US Attorney of the Northern District of Illinois, Chicago’s violent crime problem

is a complicated issue on many levels that will require collaboration between the city, state and federal level to reach a solution.

Fardon served as the guest speaker at the Chicagoland Chamber ofCommerce Board of Directors meeting at the Chicago Yacht Club this morning, addressing a group of influential business leaders about violent crime in the city and what’s being done about it.“This is a complex, multi-faceted issue that will require a complex, multi-faceted solution,” Fardon said. “Law enforcement alone is not going to miraculously make this problem go away.”

The US Attorney cited alarming trends that are specific to Chicago’s violent crime problem. Fardon said too many children are being killed and the majority of the crime is being committed in certain individual neighborhoods. He said the common denominator between these issues is gang involvement.

According to Fardon, law enforcement at the city, state and federallevel are working closely together to combat the issue through monthly law enforcement meetings, secret working groups that attack narcotic trafficking through gangs, and the ongoing Project Safe Neighborhoods.

Government agencies are also implementing programs to provide educationopportunities for youth and convicted offenders in an effort to discourage initial and repeat offenses while helping ex-convicts re-assimilate into their families and communities.

Following Fardon’s address, Chamber President and CEO Theresa E.Mintle announced that an exciting initiative which has been under development for the past two years is finally coming to fruition in the form of the Chicagoland Chamber Emerging Leaders Forum. A kick-off event for the forum will be held on August 26 at the Hyatt Regency Chicago.

“The Chamber wanted to provide our next generation of leadership the opportunity to experience a Board of Directors Meeting of one of the largest business organizations in the state; to witness and understand the processes, what business is being conducted, and what action-items

stem from these meetings,” Mintle said during the meeting.