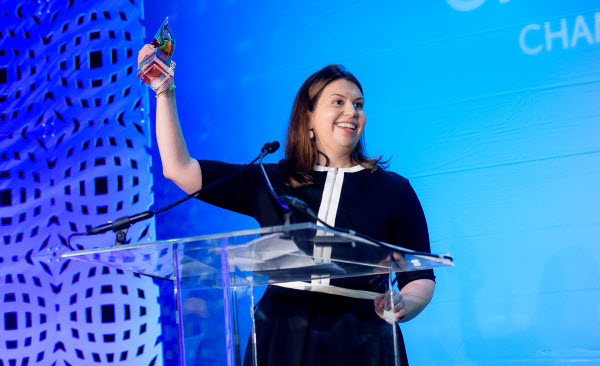 The Chicagoland Chamber of Commerce announced at its 112th Annual Meeting today that Sophie Evanoff, President of Vanille Patisserie, is the winner of the 2016 James Tyree Emerging Business Leadership Award. The award includes $50,000, courtesy of Mesirow Financial and The PrivateBank.

“We are so excited to announce Sophie Evanoff as the winner of our fifth annual Tyree Award,” said Theresa E. Mintle, President and CEO of the Chicagoland Chamber. “Vanille Patisserie is a true Chicago business story, with a passionate leader who has demonstrated an unwavering commitment to her community and the city of Chicago. Coincidentally, Sophie is our first-ever female Tyree Award winner, which is just the icing on the cake.”

Founded in 2002, Vanille Patisserie specializes in authentic French pastries, desserts, and cakes. Having already executed a national contract with Victoria’s Secret, Evanoff is looking to expand into additional markets. By reviving a depressed bakery into a potential national brand, Evanoff continues to create jobs and economic investment in Chicago’s neighborhoods.

The runners-up for the 2016 Tyree Award were Steven Dyme, co-founder and CEO of Flowers for Dreams; and Eileen Murphy, founder and CEO of ThinkCERCA. The top 12 front-runners for the award were narrowed to six via an audience vote during a live pitch event on April 14 at Mesirow Financial. A panel of judges then met to independently review and score the finalists’ original applications to narrow the field to three.