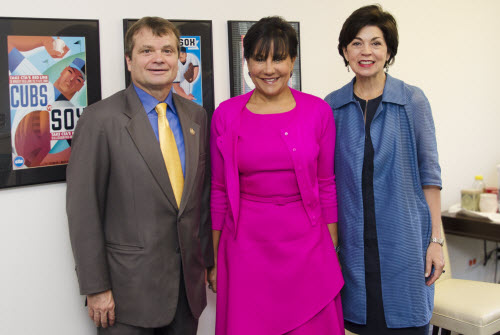 Chicago, IL – Today, U.S. Secretary of CommercePenny Pritzker and U.S. Representative Mike Quigley (IL-05) joined business leaders for a roundtable discussion hosted by the Chicagoland Chamber of Commerce to learn about important international trade issues and how they impact businesses in the Chicagoland region.

“It was a pleasure to join Congressman Quigley and the Chicago Chamber of Commerce for a robust discussion about the benefits of new trade agreements for America’s businesses and workers,” said U.S. Secretary of Commerce Penny Pritzker. “The President’s trade agenda is focused on enhancing American competitiveness and setting the conditions for the U.S. economy, our businesses and our workforce to thrive in the 21st century. Ensuring that our companies have access to some of the fastest-growing markets in the world is critical to the success of our firms and our workers. Simultaneously, these new agreements afford us the opportunity to set the standards for global trade far into the future.”

“By opening rapidly expanding markets with millions of new middle-class consumers in parts of the world like the Asia-Pacific, we will unlock opportunities for American workers and businesses,” said Rep. Quigley. “Businesses in Chicago of all sizes and across all industries have the opportunity to benefit from expanded trade opportunities that will create jobs in Chicago and Illinois. In my home district alone, exports support more than 100,000 jobs. Imagine how manymore high-quality jobs we can create by breaking down the barriers that prevent Chicago-made goods and services from entering new markets. Thank you to the Chicagoland Chamber for hosting today’s roundtable, to the many businesses for their insight and leadership, and a special thank you to Secretary Pritzker for taking time out of her busy scheduleto meet with all of us.”

The Chamber roundtable discussed international trade issues including the Trans-Pacific Partnership and how these agreements help Chicago businesses access fast-growing international markets, and afford the United States the ability to set standards for global trade.

“As the sixth largest export market in the U.S., Secretary Pritzker and Congressman Quigley understand the importance of trade to the Chicago area,” said Theresa E. Mintle, President & CEO of the Chicagoland Chamber. “This roundtable discussion provided an opportunity for Chicago businesses to inform the Secretary and the Congressman on what is needed to ensure Chicago remains a hub for trade and exports.”