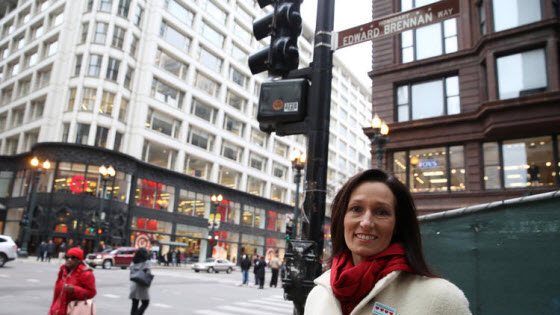 Photo courtesy of the Chicago Tribune

Recently, the Chicago Tribune ran an article featuring Linda Zabors, a client of the Small Business Development Center at the Chicagoland Chamber of Commerce, which highlighted her research and writing on the more than 2,000 honorary street signs throughout the city of Chicago.

Her work and passion for Chicago led to her being selected as one of 13 women involved in 1871's first female-focused program, WiSTEM.

Honorary WOOGM Alley first sparked Zabors’ interest a few years ago, and the rest is history.

From the Chicago Tribune piece:

“It all started just as a hobby,” she says. But she soon realized that there wasn't one place to find a lot of information on the street signs, and that some of the information she did find was wrong. She began building her own database of every honorary street sign.

That led to a book, “Honorary Chicago: The Who, Where and Why of Chicago's Brown Honorary Street Signs,” self-published in 2014, with a second edition released late last year. She has given free walking tours for the past couple of years.

Zabors’ success inspired her to join 1871 in 2014, giving her access to more effective ways to grow and develop her business. Since then, she created a website through which users gain access to maps, merchandise and the history of her research.

For assistance with the site, Zabors turned to the Chamber’s summer high school internship program, which provides consultant-style IT experience for students and assistance in digital capacities for small business owners.

Zabors is hardly the only success story to come out of the SBDC. Since January of last year, the SBDC has helped more than 150 small business owners like Zabors succeed through support in business planning, financing, marketing plans, dealing with local government and much more.  Consequently, those clients have been able to create more than 40 jobs and retain more than 90 employees throughout Chicago’s neighborhoods.