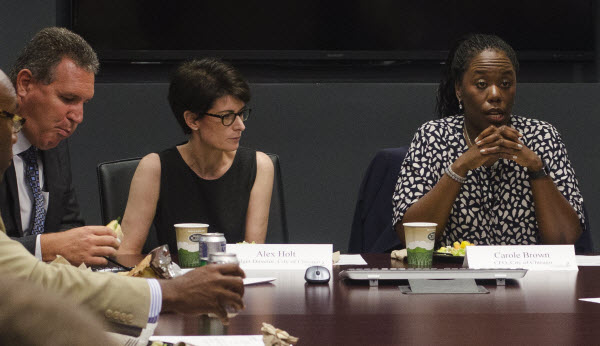 On Tuesday, August 18 Carole Brown, CFO of the City of Chicago, and Alex Holt, Budget Director for the City of Chicago, joined Chamber members for a roundtable discussion and briefing on the upcoming 2016 City of Chicago budget. The budget will be presented by Mayor Emanuel on September 22 and should be approved at the October City Council meeting, a month earlier than in years past.

Brown and Holt explained the severity of our pensions, debts, and operating deficits and discussed the need for new revenue streams and potential reforms, as the 2016 projected operating shortfall is $233 million. While the lowest since 2008, Chicago still faces a budget gap and unfunded pension liability totaling $426 million.

Chamber members enjoyed engaging on the state of Chicago’s finances during the insightful roundtable discussion with city officials.