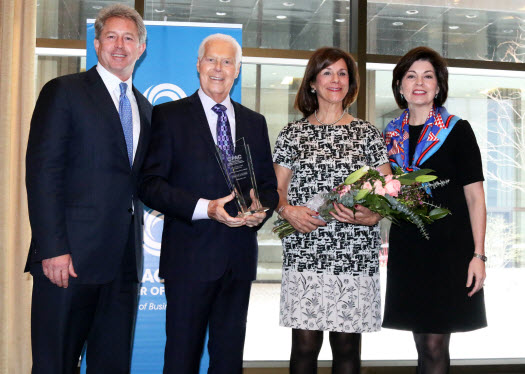 “We are excited to honor Jerry for his advocacy, dedication, and continued work to champion the business community and help keep our region economically competitive,” said Karen Melchert, Chair of the Chicagoland Chamber of Commerce Political Action Committee.

“The Chicagoland Chamber PAC seeks to make an impact in the electoral process by supporting candidates who are strong leaders for the business community and who are focused on moving Chicago and the region forward,” said Theresa E. Mintle, president and CEO of the Chicagoland Chamber. “Jerry Roper has been instrumental in the success of the Chamber PAC over the years.”

Roper served as president and CEO of the Chamber from 1993 until 2013. During that time, he established the Chamber as the voice of business for the Chicagoland region, working with elected officials on behalf of the business community to foster economic growth and create a climate conducive to job creation.

Roper spearheaded advocacy efforts which brought about the elimination of the city’s head tax, a rollback of the county sales tax, and workers’ compensation reform. In 2011, he organized the successful Pro-Chicago campaign, a job creation and business development strategy aimed at the city council that focused on creating public awareness for candidates with business growth and jobs creation agendas.

This is the first time the Chamber has presented the PAC Advocacy Champion Award, which will be given annually to an outstanding advocate for the Chicagoland business community.

About the Chicagoland Chamber of Commerce
The Chicagoland Chamber of Commerce is dedicated to making Chicagoland the most business-friendly region in America by enhancing members’ success through robust programs in advocacy, member benefits and services. Serving as “The Voice of Business” since 1904, the Chamber leads public policy and business growth initiatives and hosts educational and networking events to inform, engage, and connect members to each other and the community. Visit ChicagolandChamber.org.