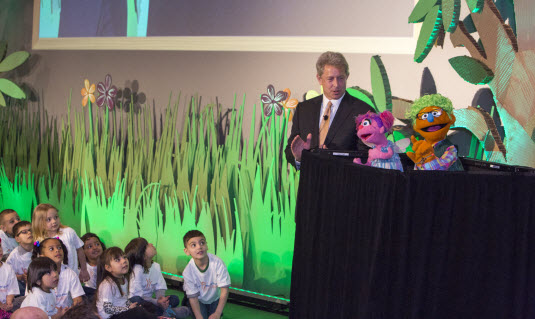 The PNC Foundation recently announced a $19 million, multi-year vocabulary initiative for underserved pre-kindergarten children during a PNC Grow Up Great 10th Anniversary event in Chicago. The city's children are among those who will benefit from three new vocabulary  programs supported by PNC. In addition, PNC is extending its early science learning program through 2015 to benefit preschool children in Big Shoulders Fund and Chicago Public Schools.

“Vocabulary is the cornerstone of a child's learning, but underserved children are far behind their peers in learning new words,” said Scott Swanson, PNC Bank regional president for Illinois. “By engaging families, educators and community partners to narrow the vocabulary gap for underserved children in Chicago, we can build on the early education progress PNC Grow Up Great has supported here.”

PNC's decision to launch the multi-state initiative in Chicago recognizes the city's commitment to early childhood education.”It is our collective responsibility to ensure that every child has access to a high quality education, and that begins with early learning programs,” said Chicago Mayor Rahm Emanuel. “PNC's commitment to bridge the word gap in conjunction with the City's investments in expanding access to early education will help give our children the solid academic foundation they need to graduate 100 percent college ready and 100 percent college bound.”

The first vocabulary program, the University of Chicago Medicine Thirty Million Words® Initiative, led by Dr. Dana Suskind, will engage 200-250 families. Suskind's work derives its name from a study that determined an at-risk child by age four would have heard 30 million fewer words that a child from a higher-income family. The PNC-funded effort will help parents build their children's vocabularies and will follow the children from age 15-months to kindergarten as part of a  five-year longitudinal study.

Another early education program designed to help families develop positive routines and habits that support children's development of vocabulary will be introduced through the collaboration of community organizations in Chicago. Four more cities will introduce the program in 2014, and an additional five in 2015.

To support PNC's focus on vocabulary, Sesame Workshop, the nonprofit educational organization behind Sesame Street™, introduced a new Muppet at the Chicago event. “Buzz Word” was created specifically for the “Words Are Here, There, and Everywhere” bilingual vocabulary program, also introduced today and developed as part of a continuing partnership with PNC Grow Up Great.

PNC donated 53,000 “Words that Help Me Grow” vocabulary tree posters,the first element in the new Sesame initiative for use in the homes of Big Shoulders Fund and Chicago Public School preschoolers. This fall, Sesame will work with PNC to rollout a free, multimedia educational kit with a DVD featuring Muppets Abby Cadabby and Buzz Word.

“Teaching letters and vocabulary is a mainstay of Sesame Street because we know it is one of the most fundamental ways to start a child on the road to learning and one of the best weapons against poverty,” said H. Melvin Ming, president and chief executive officer, Sesame Workshop. “We are thrilled to extend our work with PNC to provide families with a new resource to help young children learn new words and foster their verbal skills. Sesame Workshop is fortunate to be a part of PNC's Grow Up Great initiative, dedicated to helping children start learning as early as possible. We cannot think of a more fitting celebration of 10 years in partnership with PNC, than to offer this new resource.”

PNC also announced a two-year extension of its initial Chicago-focused science learning programs through 2015. Since 2010, nearly 1,000 Big Shoulders Fund and Chicago Public School preschoolers have participated in an innovative science program developed collaboratively with the Adler Planetarium, the Field Museum, the Museum of Science and Industry, and John G. Shedd Aquarium.PNC employees in Chicago, who served as volunteers to support many of the activities, logged 10,000 hours and donated 1,000 school supplies and items to support the program.

Created for pre-K teachers, the website can be organized by theme/subject areas and features a “Home/School Connections” printout in English or Spanish for each lesson which can be sent home to families to reinforce what their children learned in class. Designed by Barbara Wasik, Ph.D., who holds the PNC Chair in Early Childhood at Temple University and serves on the PNC Grow Up Great Advisory Council, the repository is housed on the Grow Up Great Web site at pncgrowupgreat.com/lessoncenter.

PNC grants are provided by the PNC Foundation, which receives its principal funding from The PNC Financial Services Group (NYSE: PNC).

To view or download broadcast quality video and other multimedia assets related to this announcement, visit http://pnc.mediaroom/pncgrowupgreat_10year_vocabulary-initiative.

The PNC Foundation actively supports organizations that provide services for the benefit of communities in which it has a significant presence. The foundation focuses its philanthropic mission on early childhood education and community and economic development, which
includes the arts and culture. Through Grow Up Great, its signature cause that began in 2004,PNC has created a $350 million, multi-year initiative to help prepare children from birth to age 5 for success in school and life. For more information, please visit www.pncgrowupgreat.com, www.facebook.com/pncgrowupgreat and www.youtube.com/PNC or follow @PNCGrowUpGreat on Twitter.