Technology the Focus at the 2014 US-Brazil Business Forum 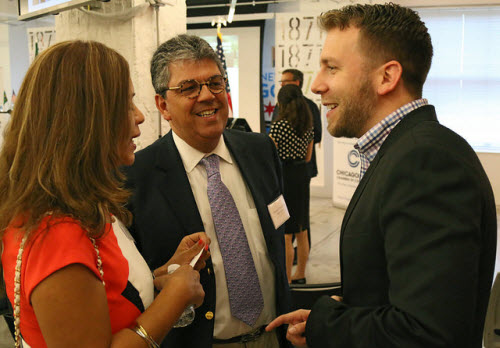 The Chicagoland Chamber of Commerce annually hosts the US-Brazil Business Forum & Cultural Exchange to explore areas of rapid expansion and opportunity in both Brazil and Chicago. The 1871 Digital Incubator was an ideal venue for the fifth installment of the event on September 3, as the focus was on opportunities in the growing fields of IT, new media and medical technology.

Hon. Paulo Camargo, Consul General of Brazil in Chicago, and Hon. Mauro Vieira, Brazilian Ambassador to the United States, both addressed the crowd and expressed optimism about increasing collaboration between Brazil and Chicago. Professor Icaro Santos, a Visiting Professor from Brazil at the University of Wisconsin-Madison, delivered the keynote address on doing business in Brazil’s medical technology sector.

McGee and Yeary provided a perspective from Chicago’s tech community while Petry provided a Brazilian view on the importance of technology education, the process for attracting Brazilian startups to Chicago and vice versa, and tools for entrepreneurs in both cultures.

The Chamber’s partnership with the Consulate General of Brazil in Chicago on programs like this forum has facilitated connections with firms and government organizations that can assist Chicagoland organizations in developing business relationships with their counterparts in Brazil.

“Over the past five years, we have worked with Brazilian and local officials to identify specific trade opportunities in infrastructure and foreign direct investment from Brazil to Chicago,” said Theresa E. Mintle, President and CEO of the Chicagoland Chamber of Commerce. “We are trying to increase awareness in Brazil of Chicago’s technology and innovation communities with the goal of attracting Brazilian businesses and tourists to our city.”