Step IT Up Chicago to Train Minority Women for Tech Jobs 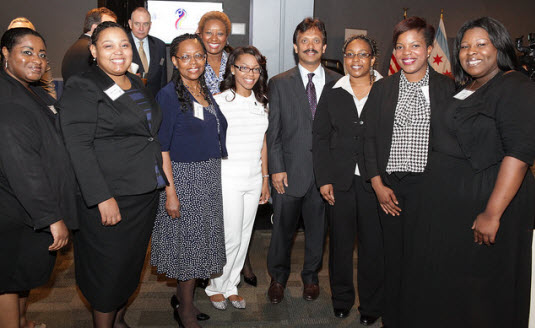 Ebony Tiggs (center, in white) with Sajan Pillai, CEO of UST Global, and members of the inaugural Chicago class of the Step IT Up
America program.

After Ebony Tiggs lost her three children in a tragic accident, herlife was consumed by grief and pain. She did not see a future for herself. Now, as a student in the inaugural Step IT Up Chicago class, she feels her life has taken on a whole new meaning.

“The Step IT Up Chicago program is giving me more hope, more courage,because I can see myself in my own office years from now,” Tiggs said. “I will be happy and my family will be happy.”

Tiggs joined a group of business leaders and city officials at the Museum of Science and Industry on Thursday, June 19 for the Chicago launch of the Step IT Up America program, which is a nationwide initiative to train and hire 5,000 minority women. Tiggs’ emotional remarks are a testament to the profound impact the program could potentially have for women in the Chicagoland area.

Mayor Rahm Emanuel, UST Global, and Skills for Chicagoland’s Futurejoined the Chamber for the Chicago launch to promote the program as a job creation initiative designed to support education and workforce development in the IT industry and boost opportunities for women and minorities.

“Creating a deep and diverse talent pool is essential to successfullydeveloping Chicago’s technology sector,” said Mayor Emanuel. “Through partnerships with Chicago’s business leaders and programs such as Step IT Up, we will ensure that our workforce has a direct pipeline to jobs and our own youth are being educated and trained for successful 21st century technology jobshere in Chicago.”

Step IT Up America, a UST Global national program, has alreadylaunched in Atlanta, Detroit and Philadelphia and plans to expand to 10 cities nationwide. Sajan Pillai, CEO of UST Global, said the program is not intended to give the women a handout, but to train them and act as ahelping hand.

“Today if you look at job creation globally, 70 percent of new jobs require technology skills,” said Pillai. “In the United States in IT alone, we have a skills gap of over 1.5 million. It doesn’t make any sense.”