Spanish Delegation Connects to Chicago through the Chamber 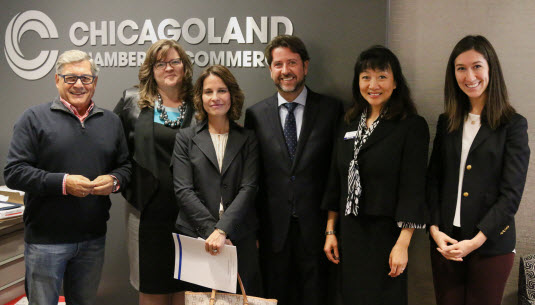 A delegation from Tenerife, Spain convened at the Chicagoland Chamber of Commerce on September 24 to explore opportunities to connect with Chicago-based companies.

Chamber Vice President for Membership Karen Hickey and Director of International Programs Shufen Zhao hosted the delegation after being contacted by the Trade Commission of Spain in Chicago. Mr. Carlos Alonso, the President of the Council of Tenerife, said the goal of the visit was to attract investments and connect Chamber member companies with their counterparts in the Tenerife region.

The Tenerife government intends to increase the number of foreign investments and the number companies in the region. The delegation says Tenerife is an ideal business location due to its geographical location, international connectivity, infrastructures which meet European standards, human resources and a very competitive tax system.