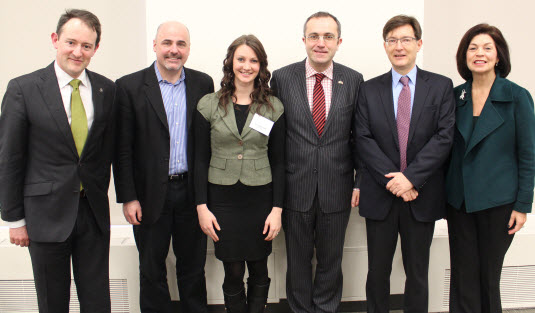 Technology plays a vital role when it comes to business growth, job creation, and the growth of the local and national economies. As two leaders from Ireland and Chicago pointed out today, the technology and innovation communities of Chicago and Ireland in particular are experiencing some of the same current trends and successes.

On Thursday, March 13 the Chicagoland Chamber of Commerce partnered with the Irish Consulate to host “Innovation and Technology in Local and International Markets”, a panel discussion featuring Minister Seán Sherlock TD, Ireland’s Minister of State for Research and Innovation; John Tolva, President of PositivEnergy Practice, LLC; and Lisa Russell, Co-Founder of Ms. Tech.

Sherlock touched on many significant topics in Ireland, including the importance of STEM research and education, areas of opportunity in technology, and the value of international collaboration. Tolva, who wasthe Chief Technology Officer for the City of Chicago from 2011 to 2013, explained what Chicago is doing to encourage tech education and promote entrepreneurship in the city. Russell, who served as the moderator, works to evolve the conversation of female entrepreneurism and advance women in tech businesses through her Ms. Tech initiative.

The event was sponsored by Microsoft and held at their offices in the AON Center. Microsoft, a global leader in technology and innovation with deep ties in both the US and Ireland, first opened its doors in Ireland in 1985 with a small manufacturing facility employing just over 100 people. Since that time, Microsoft Ireland has grown to encompass four operations at its campus in Dublin, employing over 1,200 full time employees and 700 full-time contract staff.

A New Retirement Investment Plan for Your Business