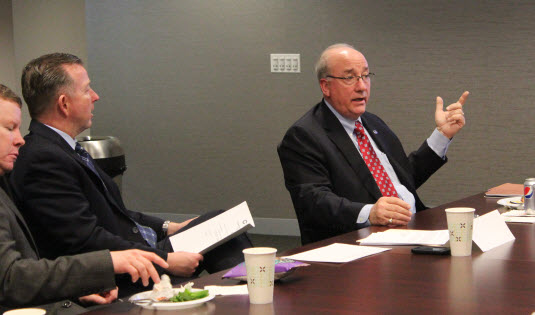 Mr. Orseno discussed Metra’s response to keep the trains running during one of the worst Chicago winters in decades. The constant presence of snow on the tracks as well as the extreme cold has created difficult conditions for the system’s rail operations resulting in delays caused by equipment damaged by the snow and ice, despite continuous efforts to keep the lines clear. Metra is planning to roll out an updated communications system later in 2014 that will provide real-time data to customers including GPS tracking and detailed alerts on specific trains.

Metra also plans to complete infrastructure improvements including the Englewood Flyover and new and rehabbed stations along the lines such as Peterson, Healy and the LaSalle street station. Additionally, Metra will be bringing new cars to the electric line as well as refurbishing 176 cars.

Mr. Bushell and Ms. Morey provided the CTA’s plans to modernize the system’s rail lines including improvements to the Red and Purple Lines to increase capacity as well as upgrading the Blue Line from downtown to O’Hare Airport through an improved track and rebuilding several old stations along the line. The CTA along with the Illinois Department of Transportation are completing a vision study of the Blue Line operationsalong the Eisenhower Expressway from the downtown Clinton station to Forest Park. The initial strategy is expected to be completed in the

spring with public meetings and environmental studies to follow.

Ms. Morey also presented on the CTA’s partnership with the Chicago Department of Transportation to build a bus rapid transit system (BRT)downtown and along the Ashland Avenue corridor. The goal of the downtown BRT is to better facilitate connections between Union and Ogilvy Stations with downtown offices and the shopping district utilizing the existing bus-only lanes along Washington, Madison and Canal streets.

The Ashland BRT is designed to help improve the efficiency of the city’s most utilized bus routes and accommodate the growing demand from the estimated 24% increase in residents along the corridor over the next 25 years. The BRT is also expected to expand the convenience of residents to get to jobs and other destinations within a 20 minute ride.