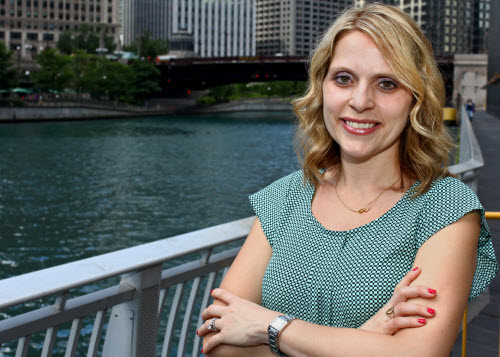 Maria Christopoulos Katris is a born entrepreneur. Her parents, Greek immigrants, started a pharmacy when she was a child. While in graduate school, she launched and sold her first business. It is only fitting that Katris, now CEO of Built In, oversees the development of Chicago’s digital entrepreneurial community.

Built In Chicago, founded in 2010 by Matt Moog, is a rapidly growing online community
that offers the number one job board for tech talent, creates and curates exclusive content on local startups, hosts monthly events and publishes data on the tech sector of Chicago. Katris immediately gravitated towards the company, seeking to utilize the newly formed community.

“The biggest gap Chicago had at that time was that we weren’tpromoting ourselves to the world,“ said Katris. “We had all these great technology companies, investors and entrepreneurs, yet no one was talking about it. And the biggest pain point for these growing technology companies was access to talent.”

Maria became employee number one at Built In and quickly applied the knowledge she gained growing up in an entrepreneurial family. Her parents, Tom and Georgia Christopoulos, moved to Chicago from Greece when they were 17 and 21, respectfully. They attended Wright Junior
College in Chicago, studying to be pharmacists, and later owned their own pharmacy in Lincoln Square.

By the time Maria was in fifth grade, she was working the cash register for the family business. During this time, she learned to give back, work hard and at the end of the day, build something you really care about.

“A lot of the lessons I use today to run Built In, I learned from watching my dad, “ said Katris. “I saw the company grow, I saw the hard times and I saw him stretch himself thin.”

While attending graduate school at the Northwestern Kellogg School ofManagement, Maria launched her own business, Nanny Boutique, a placement agency for families and nannies. This experience gave Katris her first taste of starting a company, but she always had her eyes set on something larger.

“When I worked on Nanny Boutique, I had always intended on selling it,” commented Maria, “I wanted to create something scalable.”

Since joining Built In, Maria has had the opportunity to expand thebusiness into multiple markets. After successfully opening in Chicago, Built In launched in Colorado in November 2012 and Los Angeles in January 2013. Maria and her team have ambitious goals to launch in 12 new markets within three years, the first being Austin later this fall.

Maria Christopoulos Katris is a finalist for the James Tyree EmergingBusiness Leadership Award. The award is given in honor of the late, James Tyree, who served as Chairman for the Chicagoland Chamber of Commerce. Tyree was an advocate for the community, dedicating his time and talents to numerous organizations and causes in support of healthcare, education and children. The winner will be announced June 24during the Chicagoland Chamber of Commerce Annual Meeting at Navy Pier.