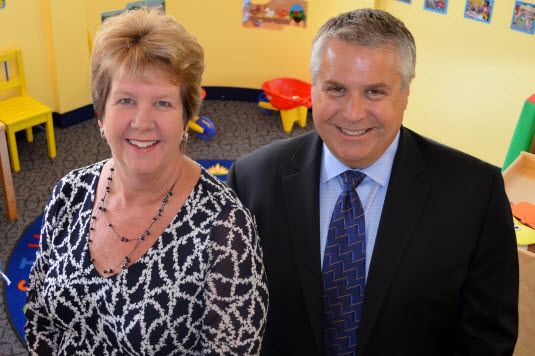 Imagine a world without sound. Think about your daily life and the amount of interaction you have that is based on your ability to listen and speak.

For most children the acquisition of language occurs naturally.Babies hear and mimic sound, learning hundreds of words by their first birthday. For a child with hearing loss, this incidental learning never occurs.

education program to children with hearing loss, preparing them for success in mainstream schools.

The organization was founded by Chicagoland families who wanted toprovide their deaf children with learning opportunities closer to homes.Many families were traveling to St. Louis or further for services and often split their families to ensure their children had the opportunities to learn.

Child’s Voice began its programs with six children and today serves over 150 students per year. The programs assist children from birth through age eight with specialized classes and training based on the child’s age and extent of hearing impairment.

Early diagnosis is critical to ensure access to sound and intervention services. In February of 2009, Child’s Voice opened the Pediatric Early Hearing Detection & Intervention (PEHDI®) Program. The program provides testing to newborns and infants at risk for hearingloss.

In August of 2013, Child’s Voice opened a second site in the Roscoe Village neighborhood. This location offers an expansion to the Early Intervention Program Toddler Group. In just six months, the number of participants in the Program doubled.

Dr. Michele Wilkins has been the Executive Director of Child’s Voice for fifteen years. For nearly two decades, Child’s Voice has been committed to provide training, testing and support allowing children with auditory deficiencies the chance to live a normal life. The company’s continued success and growth make it an ideal candidate for the 2014 James Tyree Emerging Business Leadership Award.

Dr. Michele Wilkins of Child’s Voice is a finalist for the James Tyree Emerging Business Leadership Award. The award is given in honor ofthe late, James Tyree, who served as Chairman for the Chicagoland Chamber of Commerce. Tyree was an advocate for the community, dedicating his time and talents to numerous organizations and causes in support ofhealthcare, education and children. The winner will be announced June 24 during the Chicagoland Chamber of Commerce Annual Meeting at Navy Pier.