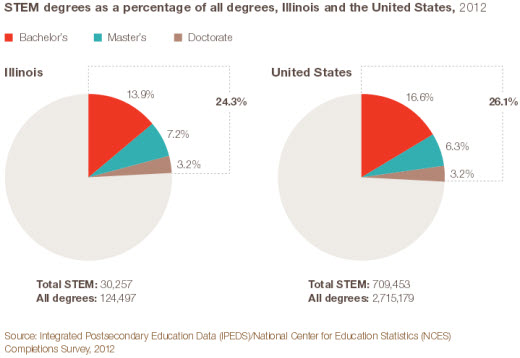 Since the Illinois Innovation Index was launched three years ago, it has regularly reported on the state’s progress in STEM education and the field’s role in the workforce. The July issue of the Index shares insights on STEM attainment at Illinois institutions and the migration patterns of talent within the region based on analysis from newly released data.

According to the Index, the state’s percentage of STEM graduates is slightly below the national average of 26.1 percent, but the number of STEM graduates in the state has risen significantly since 2009. It also reports that Chicago is losing some graduates with a bachelor’s or master’s degree to other large cities, particularly those located in theSouthwest and on the West Coast.

The competition among cities for STEM graduates is intense as theyhave become a critical part of an innovative economy. The Chicagoland Chamber of Commerce is committed to attracting, educating and retaining individuals in STEM fields to create jobs, foster innovation and grow our regional economy.

Click here to read the full issue of the Illinois Innovation Index.