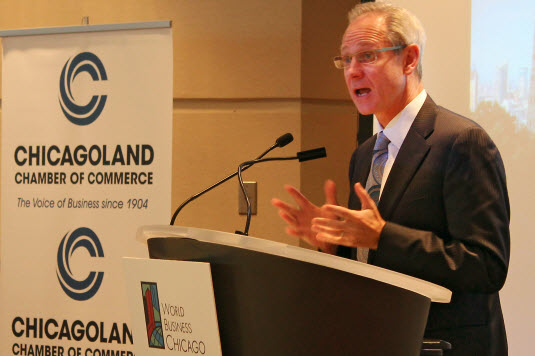 Stephen Chipman, CEO of Grant Thornton and Board Director of the Chicagoland Chamber of Commerce

The Chicagoland Chamber of Commerce and World Business Chicago co-hosted a delegation of business and government officials from eight major Chinese cities on Wednesday, June 4 as a continuation of the Gateway Cities Agreement signed by Mayor Rahm Emanuel and China’s Vice Minister of Commerce Wang Chao in December 2013.

Stephen Chipman, CEO of Grant Thornton and Board Director of the Chicagoland Chamber of Commerce, served as a host for the “Cities that Work” China Gateway Cities and City of Chicago Trade and Investment Forum at the University of Chicago Gleacher Center. Chipman has visited

five of the eight Chinese cities represented in the delegation and said he understands the importance of cooperation between these cities and Chicago.

“The business relationships and opportunities between Chicago and mainland China are going to be critical to future growth for the Chicago area,” Chipman said. “Having the Chicagoland Chamber at the center of that has a tremendous positive impact for the future development, growth and job creation of Chicago. “

Mr. Pin said he sees the value in the Chicagoland Chamber of Commerce and the city organizing the forum as an instrument for breaking down barriers and encouraging collaboration between the United States and China.

“In any relationship, you can have multiple channels. Obviously, government to government is one channel and private to private is another channel,” said Mr. Pin. “The [Chicagoland Chamber of Commerce] is a wonderful bridge for all of us.”

Mayor Emanuel said by bringing this partnership to life, the city has the potential to significantly increase international business investment and boost trade and tourism between Chicago and China.

“We have a unique agreement between eight major cities in China and the City of Chicago,” Mayor Emanuel said. “No other city in America has that.”