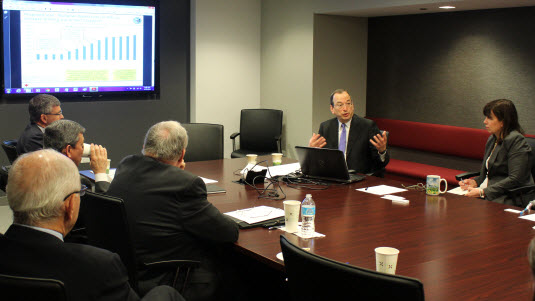 On Tuesday, April 22 Deputy Mayor Steve Koch presented the City of Chicago’s plan for municipal pension reform to the Chicagoland Chamber of Commerce Public Policy Committee. Koch explained how the Municipal and Laborers pension funds operate and gave a detailed background on City employee pension funds, including an overview on how and why the

Municipal and Laborers’ funds have fallen significantly over the past 10years. Koch stressed the urgency of the situation to the Committee, presenting data which reflected that Municipal & Laborers’ funds will both be insolvent within 9-17 years without decisive action, and the negative impact these large legacy pension liabilities have on the City’s credit rating. According to Koch, the City’s proposed plan will address the unfunded liability of Municipal and Laborers funds over a 40-year stabilization plan.

The next meeting of the Public Policy Committee will be held on July 8, 2014.