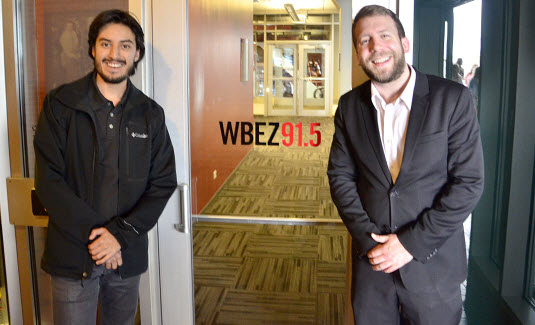 The Chamber's Greg Stevens (pictured right) with Felipe Lara, Founder of Conoce in Mexico City, before their interview with WBEZ on Friday.

Last week, the Chamber co-hosted a delegation of officials and business leaders from Mexico City for four days of learning about Chicago’s business community, tech scene and economic development strategy.

After spending a busy week coordinating meetings with key members of the delegation, the Chamber’s Greg Stevens joined WBEZ on Friday to discuss how Chicago is uniquely positioned to attract and develop tech firms from around the globe.

“We’re able to circulate firms, capital and mentorship globally in a way that was unprecedented before,” Stevens said. “That means that we can then attract these firms into Chicago, ultimately with the goal of making the Chicago technology ecosystem the base with which they enter the U.S. market, get resources, and then expand to other markets in the U.S.”

According to Stevens, Chicago’s advantage over other cities like LosAngeles, San Francisco and New York is our approach to business and collaboration.

“We have more of a personal culture of doing business. In South America, Mexico and Central America, trust is very important and your word is very important,” Stevens said. “When we do business , we tend to do it in a similar fashion.”

Through programs like the Mexican delegation’s four-day immersion, the Chamber will continue to explore business partnerships and strengthen economic ties between international cities and businesses.

This Thursday, the Chamber is hosting an EU panel focused on how European countries hit by the financial crisis plan to create a competitive model for future growth. The following week, the Chamber is co-hosting the China Gateway Cities and City of Chicago Trade and Investment Forum featuring Mr. Zhang Xiangchen, China’s Assistant Minister of Commerce.