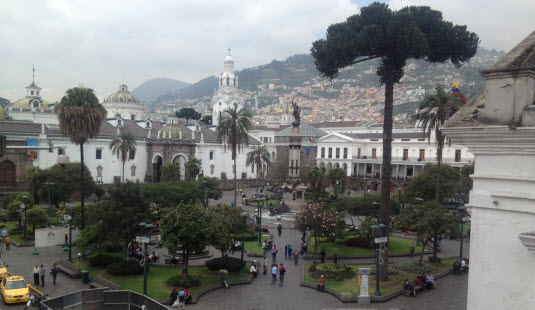 The Plaza Grande in Quito

Our efforts to build a smart and sustainable city begin right here in Chicago, but over the past month have stretched as far as Quito, the capital city of Ecuador.

Greg Stevens, International Trade Center Manager at the Chicagoland Chamber of Commerce, was invited to speak on behalf of the Chicagoland business community at a summit in Quito, where he discussed the current economic ties between Chicago and Ecuador and the emergence of Chicago as the 10th ranked global city by the Startup Genome in the area of information technology.

During the visit, Stevens briefly met with the Mayor of Quito and participated in a presentation to a closed group of strategists, politicians, and major Ecuadorian stakeholders. The presentation focusedon the recent history of the Chicago technology community and the various elements that have come together to allow Chicago to emerge as aglobal leader in the area of information sciences.

Other key issues were addressed on the trip, including the recent developments at O’Hare’s Perishables Center, something the City of Quito and the country of Ecuador see as a critical part of the intercultural and business relationship between the two ecosystems. Additionally,
Ecuador has broken ground on the highly anticipated “Yachay City of Knowledge”, which is the country’s most ambitious project in a century. The initiative is intended to strengthen the knowledge sector and drive sustainable growth and will include the creation of a university, a center for the research, development, and incubation of firms in the areas of biotech, healthcare, and information Sciences.

Additionally, Greg met with senior development officials from the Municipality of Quito to learn about investment opportunities in the infrastructure, tourism, and urban development sectors. This trip caps off a six month period of close work with the Trade Commission of Ecuador that saw Chamber leadership host the Ecuadorian Minister of Foreign Trade H.E. Francisco Rivadeneira and two visits from Madam Nathalie Cely, the Ecuadorian Ambassador to the United States.

Key Trends and Regulatory Changes to Watch in 2022