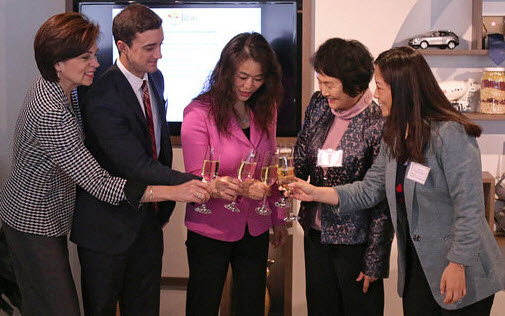 Over the past few months, the Chicagoland Chamber of Commerce has participated in programs with a variety of Asian countries, cities and regions to help promote economic collaboration between these two parts of the world, including events with Vietnam’s Binh Duong Province and a delegation of eight major Chinese cities.

The Chamber continued those efforts today as President and CEO Theresa E. Mintle spoke and helped cut the ribbon at the Grand Opening of the new JiLin Chicago Business Center in the Crain Communications Building on Michigan Avenue.

Jeff Mahaffey, the new business center's CEO and the COO of Global BioChem Technology Americas, chose Chicago as the American hub to promote two-way trade and investment with the JiLin province of China. Mr. Mahaffey said the province chose Chicago because of its size, the city’s conference and convention industry, and its role as a global transportation hub.

Mintle pointed out Chicago’s diverse economy, the number of Fortune 500 and foreign-owned companies headquartered in the region, and the city’s highly skilled and diversified workforce as key reasons the center should thrive in Chicago.

“We feel Chicago has much in common with your region,” said Mintle. “We are confident that the opening of the Center will create new opportunities to both our City and JiLin Province and this cooperation will benefit both of our communities and bring mutual prosperity. We look forward to working closely with your Center in the future.”

Other speakers at the event, including representatives from the China Embassy, the Department of Commerce of JiLin and World Business Chicago, discussed the value of developing economic partnerships between these two regions and opportunities for American and JiLin businesses looking to tap into new markets.