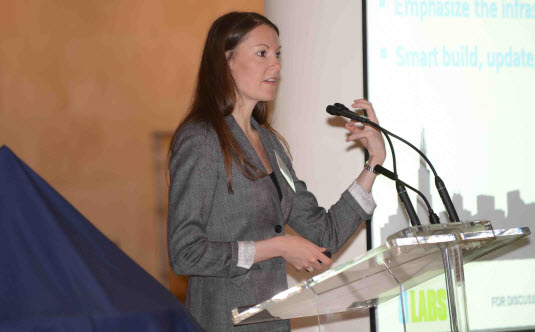 It was major news this February when President Obama announced that a national digital manufacturing lab operated by UI Labs would be built in Chicago. To discuss the new Digital Lab for Manufacturing as well as UI Labs’ future plans and vision with the city’s business elite, UI Labs executive director Caralynn Nowinski spoke at the Chicagoland Chamber of Commerce Board of Directors Meeting on Tuesday, April 29.

UI Labs, a Chicago-based research and commercialization collaborative, works to channel talent, encourage collaboration, foster economic growth and bring technology to businesses of all sizes. Nowinksi encouraged engagement and collaboration from the Chamber’s Board, explaining how the new manufacturing hub is a huge initiative aiming to reinvigorate Chicago as a manufacturing hub, spurring long term economic growth and job creation.

Chamber Chairman Scott Swanson followed Nowinski at the podium, announcing that the Chamber’s 110th Annual Meeting of Membership will be held on June 24th at Navy Pier’s Grand Ballroom, with Randall Stephenson, Chairman and Chief Executive Officer of AT&T, serving as

the Keynote Speaker. Swanson also announced that the Chamber is now accepting applications for the 2014 James Tyree Emerging Business Leadership Award, which is given annually to one ofChicagoland's high growth small businesses.

In addition, Swanson announced the creation of the Gerald J. Roper Award for Business Excellence, named after the former President and CEO of the Chamber and given annually to a Chamber Board member who best embodies Jerry Roper’s spirit and enthusiasm for the city and who has made a noteworthy contribution to the Chamber. The inaugural recipient
is Dan Boho, General Counsel of the Board and Senior Partner at Hinshaw & Culbertson.

“I am honored to present the very first Gerald J. Roper Award to DanBoho,” Swanson said. “While Dan has a day job as a Senior Partner at Hinshaw & Culbertson, you wouldn’t know it by all of the time and effort he puts into his role as the Chamber’s General Counsel.”

Mark Segal, Chair of the Chamber’s Public Policy Committee, gave an update on the Chamber’s public policy work in Springfield and reminded those in attendance to support the Chamber’s Political Action Committee. Theresa E. Mintle, Chamber President and CEO, closed out the meeting,discussing the current state of the Chamber as well as the organization’s future vision and strategic plan around membership and programming going forward.