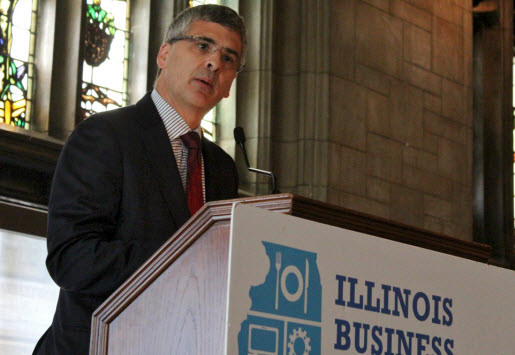 The Illinois Business Immigration Coalition (IBIC) continued its push for comprehensive immigration reform as it hosted “Immigration Reform: Bottom-Line 2014” on Monday, June 9. Local politicians, CEOs and Latino and Asian business leaders shared their personal experiences with the nation’s broken immigration system and demanded a congressional vote on the issue.

“We see not only the moral and political appropriateness of this, butas the voice of business in Chicago, we see the economic implications for comprehensive immigration reform for the Chicagoland area and the nation as a whole,” said Mark Segal, Chair of the Chicagoland Chamber Public Policy Committee. “Without question it will drive growth and create jobs, which are really the hallmark of what we do.”

Governor Quinn, Mayor Emanuel and dozens of business and government leaders stressed the importance of immigrants to the economy and our workforce. The immigration reform package they called on Congress to pass includes visa expansion for high and low skilled workers, a path tocitizenship for undocumented immigrants, and en end to deportations that are separating children from their parents.

“Nearly half of all new small businesses in our country are startedby immigrants, which means you can’t be pro-business and anti-immigration reform,” said Mayor Emanuel. “The contributions of immigrants aren’t just part of our past, they are vital to our economic future.”

Throughout the event, the speakers urged all in attendance to write to House Speaker John Boehner and President Barack Obama insisting they work together to pass immigration reform legislation in 2014. Click here to visit the IBIC website to learn more and take action.

Last May, US Senator Dick Durbin and US Congressman Bill Foster joined the Chicagoland Chamber of Commerce for a panel discussion on the need to pass this reform. The Chamber helped launch the IBIC and has supported efforts in Congress to pass immigration reform because of the direct positive impact it will have on our economy.

Key Trends and Regulatory Changes to Watch in 2022