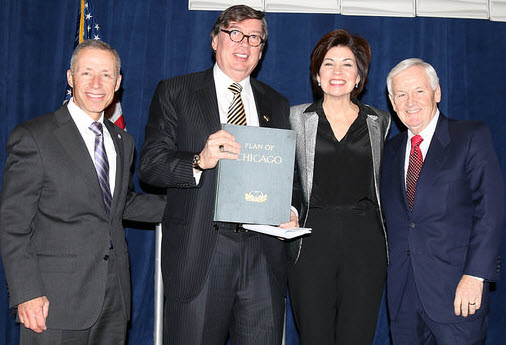 On Wednesday, November 19 the Chicagoland Chamber of Commerce and a ballroom full of Chicagoland business leaders celebrated the many accomplishments of Alejandro Silva, the 2014 recipient of the Daniel Burnham Award for Distinguished Leadership.

Silva, the first Mexican-America recipient of the award, is the Chairman of Evans Food Group, a Chicago-based company that is the world’s largest producer of pork rinds. After almost thirty years immersed in Chicago’s business and entrepreneurial communities, Silva is as excited as ever about the prospects for small businesses and startups, particularly within the city’s Hispanic workforce.

In fact, he announced at the dinner his plans to launch a brand new organization: the Latino Corporate Directors Association, the first non-profit for Latino directors from Fortune 500 companies.

“The purpose is to increase the number of Latinos on public boards,” Silva said. “If you look at the population, Latinos are under-represented in this area. So we founded LCDA to gain more seats at the table. Women and African Americans have already done this, and I’m excite to be a part of this ‘start-up’.”

Silva stressed the importance of larger, more established companies like his own tapping into Chicago’s burgeoning tech community for resources and collaboration. He also emphasized a more personal passion, which is capitalizing on Chicago’s growing Hispanic market. He used 26th Street in the Chicago community of Little Village as an example, citing it as the second-highest generator of tax revenue in the city behind only Michigan Avenue. And that’s only the beginning.

“The Hispanic population is growing faster than any other segment in the United States,” Silva said. “Advertisers are only just catching on and Chicagoland businesses need to catch on, too. Not only is the Hispanic market a viable revenue prospect, the Hispanic workforce is strengthening along with the community.”

Alejandro has built a highly successful career in pork rinds; Chicago hopes he can match that success with his vision for advancing minorities in the city’s business and entrepreneurial communities.