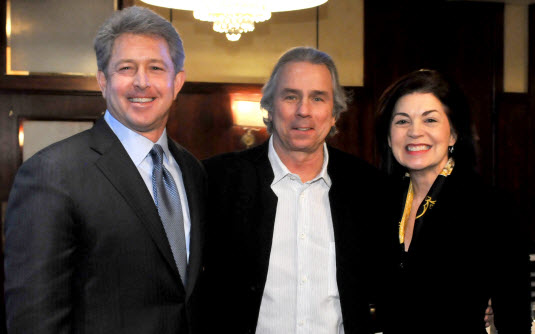 In his work as a serial entrepreneur, turning around Kendall College, heading Tribeca Flashpoint Media Arts Academy, and now as the new CEO of tech incubator 1871, it’s tough to argue against Howard Tullman’s experience and expertise in Chicago’s business community.

This made him an excellent choice to address the Chicagoland Chamber of Commerce Board of Directors, which he did this morning at the quarterly Board meeting at Petterino’s in downtown Chicago.  In addition to laying out his plans for 1871, which include a video lab, a national “Google for entrepreneurs” competition, and an initiative to connect innovative startups from international countries to the Chicago market, he expressed a desire to collaborate with the Chicagoland Chamber and its Board of Directors.

“In addition to giving our community of companies substantive feedback and expertise, you will see what’s on the horizon and learn from them as well,” he said. “That’s why it’s a win-win.”

Tullman pointed out that the Chamber’s membership base is an ideal fit for connecting with young startups at 1871 because mid-size and smaller companies are often easier to collaborate with than Fortune 500 companies and the red tape that comes with them. Tullman said while they are happy with the great space and compelling culture at 1871, he will focus on adding valuable resources and consistently producing innovative, successful companies into the future.

“The Chamber will advocate for passage of reforms that will require greater contributions by public employees to avoid increased taxes on businesses,” said Segal. “Additionally, the Chamber will support a moratorium on the pension obligation while negotiations on a reform solution are worked out.

Chamber President and CEO Theresa E. Mintle spoke at the end of the meeting, highlighting that it is the intention of her and the leaders ofChicago’s other prominent business organizations to collaborate and work together, share information, and keep the Board of Directors involved and informed to create a new synergy here in Chicagoland.